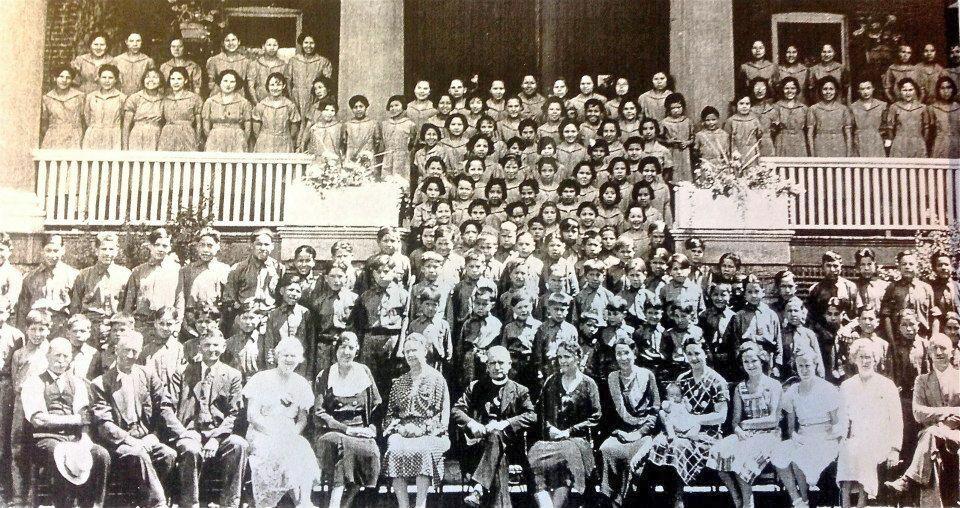 
June 10, 2021 – Hundreds of Native American children’s remains were recently found in a mass grave at the site of a residential school in Canada. Indigenous communities are calling for further investigation at similar sites in the United States and Canada.

Members of the Akwesasne Mohawk community and other Haudenosaunee, or Iroquois, tribes were taken from their families.

“The physical blows were obvious. Food deprivation occurred almost all the time. People ask me, “How do you feel about this place in general? And I say, ‘Well, that was hunger,’ said Doug George, whose Akwesasne Mohawk name is Kanentiio.

The first of these facilities, the Carlisle Indian Industrial School, was founded in the 1870s by Military Captain Richard Pratt. It was a way of assimilating Native American children into “white” society and, in Pratt’s words, “to kill the Indian to save man.”

“The intention was to turn us off as native people and destroy any sense of self-worth that we had, and I can say they were successful to a great extent,” Kanentiio said. “They killed our mind. They killed us.

Many students sent to these schools have disappeared. Last month, 215 children’s remains were discovered in British Columbia at one of more than 500 residential schools in Canada and the United States

The find sparked new calls for justice from Indigenous communities and further investigations – forensic and archaeological – into more residential schools.

“It is high time for this American country to recognize the great worth and resources of its indigenous people and to celebrate, promote and support,” said Michael Galban, curator at the Seneca Art and Culture Center at Ganondagan State Historic Site.

Last year, Democrats in the US Congress introduced a bill that would create a Truth and Healing Commission, which would investigate and document the past injustices of what they call the federal government’s cultural genocide. So far, the bill has not moved forward one way or another.

It would also mean recording oral histories of survivors’ experiences.

“Every day we lose the stories of survivors as they age and die,” he said. “I hope they share their stories with their families. “

The staff and students of the Mohawk Institute pose in front of the residential school in Brantford, Ontario. (circa 1930s) Photo: RICHARD POWLESS / SUPPLIED BY DOUG GEORGE-KANENTIIO

Residential schools were compulsory at the time. It will be another 12 years before the Indian Child Welfare Act of 1978 gives Native American parents the legal right to refuse the placement of their children in these kinds of schools off reserve.

Until then, Indigenous leaders and families were largely held hostage by the federal governments of the United States and Canada.

“If there had ever been any action, whether by the rulers or the families, to arrest or take back their children, they were often persecuted and arrested and also encountered problems for this,” said the great- Mohawk Chief Abram Benedict.

In 1966, Kanentiio was 11 when police and social services took him from the St. Regis Mohawk Reserve near Ottawa, Canada, and sent him nearly 350 miles west to Mohawk Institute in Brantford, Ontario.

He is now one of the remaining 40 Mohawk survivors.

At school, Kanentiio said the abuse came not only from staff, but also from older students who he said were encouraged to discipline the younger ones.

After a few years he managed to escape. First by way of expulsion: he and his classmates were non-conforming troublemakers.

“Our rude behavior was our survival,” Kanentiio said. “We couldn’t just be compliant. We had to fight, physically if necessary, to prevent these things from happening. “

Yet when he was deported, he was not returned to the reserve. He was placed in foster care and bounced from house to house until he finally managed to escape home, he said.

Over 50 years later, Kanentiio wants to be able to confront those personally responsible for the brutal treatment, abuse and heartbreak of families.

“It is a terrible thing to walk around believing that you are not really a human being or a whole human being,” he said. “Something deep and wonderful has been lost. And that’s the terror of this thing.