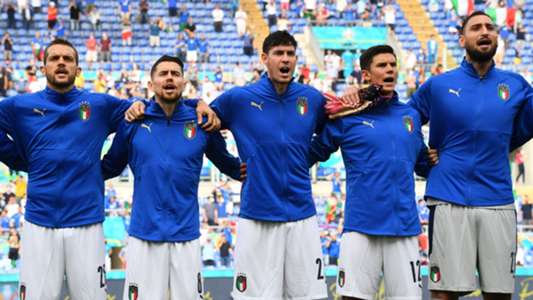 The Italian Football Federation (FIGC) has confirmed that the national team will kneel in solidarity if their next Belgian opponents choose to do so, but say this does not support the Black Lives Matter campaign.

The statement comes after center-back Giorgio Chiellini said the team will kneel down if an opponent does.

Amid the confusion over whether players were free to kneel, the federation supported this view, saying taking the knee will be done to show solidarity with their opponents.

“As Chiellini explained, the team will kneel in solidarity with the opponents,” the federation said, according to The Republic.

“Not for the campaign itself, which we don’t share. The Austrian players did not kneel and ours remained standing. If those in Belgium do so, ours too will be in solidarity with them.

The FIGC added in a second statement: “The Italian Football Federation, reaffirming its unconditional position against racism and any form of discrimination, has seen fit to give the team the freedom to join the ‘Black Lives’ campaign. Matter ‘.

“As President Gabriele Gravina already stated no more than a week ago, the FIGC considers the imposition of any behavior in itself as a form of speaking and supports the team’s decision for matches. of Euro 2020, including against Belgium on Friday.

“The sensitivity of each member of the Italian national team to the defense of human rights is in the DNA of the Azzurri, as proven by multiple initiatives and declarations, and cannot be subordinated to membership in a – not the only one – manifestation of support for the struggle. against racism.”

What has happened so far?

To date, there has been confusion over Italy’s position as only a handful of players have kneeled ahead of the team’s group stage game against Wales.

Andrea Belotti, Matteo Pessina, Emerson Palmieri, Rafael Toloi and Federico Bernardeschi all knelt alongside the entire Wales squad, sparking a discussion on how Italy would handle such situations going forward.

After the incident, former Prime Minister Enrico Letta slammed the players who did not kneel, saying: “I call on our players to take the knee all together. Five took the knee and the rest did not – frankly, it was not a good show.

“If they can all agree tactically beforehand in the locker room, maybe they can do the same to take the knee. It’s a positive move. To watch on Sunday, with all the Welsh players on their knees and only half of the Italian players do so, was not a good image. “

His frustrations were echoed by former Italian star Claudio Marchisio.

“There is freedom of choice, but this is a very important demonstration, and I would have preferred everyone to kneel,” he said. RAI Sport.